Hello and welcome to our blog where we explore the ever-evolving industry of location.

We want to take you on a journey of positioning and location insights and specifically, the world of ‘indoors’.

First up is a trip back in time where Tughrul Arslan investigates the different types of indoor positioning systems that evolved into what they are today. We invite you to dive right in, ping us your comments and share with your peers.

The development of Global Navigation Satellite System (GNSS) has seen a revolutionary growth in the last four decades. The system which was developed in the 20th century mainly for military purposes has gained wide traction in civilian applications. The use of GNSS has ranged from official tasks such as military and surveying to personal usage such as automobile navigation and hiking. The increasing interest in location-based applications can also be seen from the increase in GNSS providers such as Global Positioning System (GPS), Global Navigation Satellite Systems (GLONASS), Galileo, etc. Despite multiple providers for GNSS, these all suffer from the same challenge; it doesn’t work in an indoor area, specifically an area without line of sight to the satellites.

Indoor positioning systems (IPS) are developed specifically to provide positioning indoors. Currently, there is no standard for IPS, and multiple approaches are adopted by various providers be it commercial or public.

The technologies vary depending on criteria such as the hardware required, the existence of networks, etc. There are different mediums used to determine position and so the IPS systems could be classified based on using vision, radio frequency, magnetic field, audio and ultrasound technologies.

Vision-based positioning uses the principle of landmarks and maps to determine position. Basic implementation of vision based positioning is an image captured and compared with pre-recorded image from a database which has a position associated with it. Some implementations capture an image of an area and instead of comparing the image to a pre-recorded image, the building structure in the image is analysed and compared with a building layout. In the past, vision-based positioning mainly interested those who worked in robotics as a precise location is required for robotic navigation.

The demand for Visual positioning for consumer applications has increased with the rising popularity of smartphones as these contain both cameras and powerful processors required to process the required image processing algorithms. The introduction of Google’s Tango device has further piqued the interest of researchers in the area of visual positioning especially those incorporating 3D modelling.  In the recent years, researches have also exploited visible light technology by using signals transmitted by LEDs.

Radio frequency is one of the key technologies widely used for IPS. This is due to the availability of already existing networks and hardware.

This category can be further divided depending on the type of the different wireless technologies such as cellular, Wi-Fi, ultra-wide band (UWB), Radio-frequency identification (RFID) and Bluetooth.

Cellular positioning has the advantage of widely available signals, and the hardware of customary mobile phone can be used, however, it suffers from low reliability due to varying signal propagation conditions.

Yet, the Wi-Fi signal also suffers from low signal reliability which means not being precise enough for certain applications.  Achieving higher levels of accuracy requires a detailed calibration process and the installation of further access points to improve the accuracy further.

UWB positioning can result in very high accuracy in positioning even in the presence obstacles. But then again, it requires the installation of expensive UWB infrastructure which reduces the interest in the technology for commercial applications (we all look for solutions that are cost effective as much as they are efficient).

Then we’ve got the RFID which tends to be cheap in terms of hardware cost and deployment depending on the chosen signal frequency but it lacks capability to be available in mobile devices, especially smartphones. This is a major drawback in terms of user accessibility.

Bluetooth, on the other hand, has the inherent capability in mobile devices but expensive compared to RFID hardware cost. With the introduction of Bluetooth 4 or Bluetooth Low Energy, which targets emerging Internet of Things (IoT) applications, it is increasingly being adopted for indoor positioning as it can also serve as an IoT getaway. Besides, the technology is already embedded in smartphones as well as being characterised with low energy consumption at both transmitter and receiver ends. The use of Bluetooth as a technology for indoor positioning is further reinforced by the introduction of two Bluetooth Low Energy Beacon protocols, iBeacon and Eddystone, by two of the largest technology companies, Apple and Google respectively. 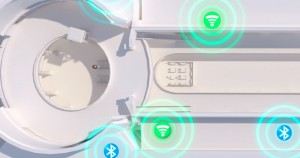 Another indoor positioning approach is based on using inertial navigation systems. As this approach uses the accelerometer and gyroscope available in most smartphones, it is another viable technology which is used in conjunction with other technologies that find the initial location and then use inertial positioning to fine tune the accuracy.

Most of these technologies suffer from one similar challenge. They are highly manual with high complexity calibration that makes them expensive and not suitable for world-scale mass deployment.

In most cases, to further improve the positioning accuracy, a more detail calibration is required. The calibration process typically would include beacon or access point deployment and the creation of a reference point for fingerprinting. Automatic crowd sourcing, pioneered by sensewhere, automates the calibration process by the deployment of cloud based algorithms that turn users’ mobile phones and wearable devices into “automatic fingerprinting” engines.

For example, the automatic crowdsourcing algorithms gather specific information to build a global and universal database in real-time. The crowdsourced nature of the algorithms implies that no manual surveying is required, and the database continually improves with additional data gathered. The automation of the calibration process also reduces the cost of the initial setup which further increases attractiveness and commercial interest.

All in all, indoor positioning as an industry is rapidly growing with the view to benefiting the consumer and making it easy to move, plan, shop and ultimately step into the world of the future.

For more insightful pieces from our expert heads at sensewhere follow us and keep your eyes peeled!