sensewhere a finalist for BBA in innovation

SHANGHAI, Sept. 7, 2016 /PRNewswire/ — On the evening of 6 September, the British Business Awards 2016 (BBA) finalists were revealed at the InterContinental Shanghai Ruijin. 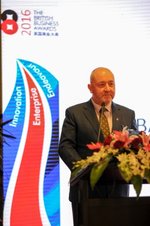 BBA Head Judge, also Chairman of the British Chamber of Commerce Shanghai, Barry Piper, opened the evening before award sponsors announced the 5 finalists, for each of the 8 award categories.

Finalist interviews will
be conducted in following weeks and final award winners will be announced during the Gala Awards Dinner, held on 3 November 2016, in Shanghai.

The British Business Awards 2016 finalists are:

Education Institutional Partnership of the Year – Sponsored by The British Council

Sustainable Business Award – Sponsored by The British Chamber of CommerceShanghai

British Company of the Year – Sponsored by British Airways

About the British Business Awards

Past winners include BP, GKN, InterContinental Hotels Group, Jaguar Land Rover, Standard Chartered, Unilever, Virgin Atlantic and many others. VIPs such as SirSebastian Wood, then Her Majesty’s Ambassador to the People’s Republic of China; His Royal Highness Prince Andrew, Duke of York; Sir Roger Carr, then President of the Confederation of British Industry has also participated.

Patron of the 2016 British Business Awards is Barbara Woodward, Her Majesty’s Ambassador to the People’s Republic of China.

About The British Chamber of Commerce Shanghai

The history of the British Chamber of Commerce Shanghai dates back to 1915, when it was first founded. Now 100 years on, as one of the oldest foreign Chambers still operating in China, the Chamber’s original ethos of helping each other in the interests of growing British trade with China, is as true today as it was 100 years ago.

By holding over 120 events every year, the Chamber offers a vast amount of information and is able to promote the exchange and sharing of expertise among its professional community. The large network to which we offer access to also assists members to raise their profile locally and rapidly expand their business contacts here in East China. Currently, the Chamber represents over 350 companies with around 1500 cardholding members.