sensewhere, an Edinburgh-based provider of indoor-location technology, has been awarded £1.4 million by Scottish Enterprise, enabling it to create jobs in the Scottish capital and develop its software.

The company, a spin-out from the University of Edinburgh, is focused on software that offers universal location and navigation data to locate users and devices in dense urban areas like shopping centres and airports, where GPS and other global navigation satellite systems are blocked.

Speaking to Scotland on Sunday, chief executive and co-founder Rob Palfreyman said the funding is “huge” and “significant” for the firm. The cash injection will be used to support research and development over the next three years to improve its technology; for example enhancing location accuracy, and performance indoors, outdoors and across multiple platforms. 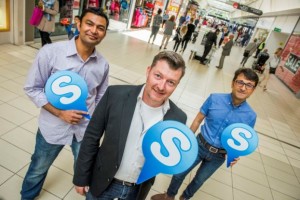 Palfreyman said the financial contribution acknowledges the firm’s “world-class” technology, and will help “drive forward and accelerate” the development of its technology to stay ahead of the market. As well as helping it add at least a further ten patent applications over the period of the grant, the capital will also enable the business to create seven jobs over the next 12 months at its base on Princes Street, complementing its current workforce at the site of 13 full-time equivalent staff. “This grant really is going to enable us to continue to add resource in Edinburgh,” he said, explaining that the seven staff will comprise six in technical engineering and one on the commercial side.

He also pointed out that the funding complements a cash injection last year from Chinese internet services group Tencent. “The value of the company resides in our database, and we are now starting to monetise that database in the form of location-based advertising,” he said, adding that sensewhere has been working with Scottish Enterprise since the firm’s formation in 2009.

Jim Watson, director of innovation and enterprise services at Scottish Enterprise, added: “sensewhere is a great example of an ambitious Scottish company that’s developing innovative technology for global markets… it’s really great to see it expand and develop.” Palfreyman noted that the business is looking to “court” internet giants like Google, and also recently announced a partnership with navigation and mapping firm TomTom. “That’s just starting to yield business for us,” he said of the latter. As to whether sensewhere will pursue further funding any time soon, he said: “Never say never, but at this particular point I think we’re secure for the next few years.”
Source: the Scotsman.